Paul Gauselmann’s success story is the life story of one of the last great German entrepreneurs of the post-war era. Of a patriarch with a social ethos, but also a few rough edges. With his pronounced instinct for promising ideas and trends, he has succeeded in as little as six decades to not only put his own company at the top of the German vending and gaming machine industry, but also in his capacity as chairman of the industry association to support other vending machine operators in their prosperous business development. On 26 August, company founder and Chairman of the Management Board of the eastern Westphalian Gauselmann Group, honorary citizen of the towns of Espelkamp and Lübbecke, bearer of the First Class Cross of Merit of the Federal Republic of Germany – PAUL GAUSELMANN – celebrates his 85th birthday.

The entrepreneur, who was born near Münster (Westphalia) in 1934, began his career by training as a telecommunications inspector. A few years later, he took up a part-time occupation installing jukeboxes, which led to full independence in 1964. In 1974, the entrepreneur opened his first proprietary and thus the first modern arcade. Just three years later, he conquered the German market with his first proprietary gaming machine, the Merkur B. Numerous other innovations from the company's own think tank followed, such as the Merkur Disc, which, with over 40,000 units sold, culminated in 1985 with the Gauselmann Group becoming market leader in Germany with a market share of more than 50 per cent.

The MERKUR brand name has since been synonymous with innovation, quality and a wide range of games. The MERKUR sun is both nationally and internationally one of the most well-known symbols of luck in connection with gaming in restaurants and pubs, arcades, casinos, aboard ships and on the Internet.

With approximately 14,000 employees, well in excess of 2 million produced amusement and gaming machines and annual sales of over 3.6 (fully consolidated 2.4) billion euros (12/2018), the Gauselmann Group is today one of the world’s leading gaming corporations. Since 2016, the company has operated under the mantle of the Gauslemann Family Foundation.

In addition to his own corporate success, Paul Gauselmann has also always focused on the prosperity of the entire vending machine industry. As early as the 1960s, his commitment played a decisive role in shaping industry policy in the associations.

As Chairman of the German Amusement and Vending Machine Industry Association “Verband der Deutschen Automatenindustrie e. V.” (VDAI), Paul Gauselmann has with his entrepreneurial foresightedness for the past 38 years overseen the development of the industry into a major branch of the economy with more than 70,000 employees.

In the Minden-Lübbecke economic region, the Gauselmann Group ranks among the leading top employers. And Paul Gauselmann is proud of the fact that 25, 30, 40 or even 45 years of service to the company are not uncommon among the staff. 239 trainees/apprentices and dual study students are currently training to earn qualifications in 20 different training occupations. The industry-specific and Chamber of Industry and Commerce (IHK)-approved training course leading to the qualification ‘coin-op specialist’ has been offered since 2008. Company founder Paul Gauselmann himself was one of the key initiators who campaigned for the conceptual design and introduction of this apprenticeship profession. This year alone, 88 young recruits began their training in the company on 5 August.

From a sports point of view, Paul Gauselmann’s heart beats for tennis and handball. Paul Gauselmann supports his local Espelkamp-Mittwald e.V. tennis club (TVE) in three ways: as a sponsor, honorary chairman and an active team player. It is also thanks to his commitment that the TVE has taken home three German Championship titles in recent years.

Paul Gauselmann has also been the main sponsor of the TuS N-Lübbecke handball league team for several decades. The company also sponsors numerous regional clubs such as the local regional league football team FC Preußen Espelkamp on a regular basis.

Paul Gauselmann is particularly committed to supporting all those projects and initiatives directed at prophylactic health care and emergency care in the district.

As a benefactor of the Paul and Karin Gauselmann Foundation, which is dedicated primarily to supporting social and cultural causes in the area surrounding the company’s headquarters in the Minden-Lübbecke district, Paul Gauselmann also has an open ear for the concerns of others. The considerable income of the respective foundation funds helps to support hundreds of projects, initiatives, clubs, groups and private individuals every year.

Behind the successful entrepreneur is a strong family! “Whether on the Management Board, the Supervisory Board or within the context of the Foundation – my family is both privately and professionally the most important pillar in my life,” Paul Gauselmann admits. My sons have also each in their own way contributed significantly to the present success of the Gauselmann Group. I would like to say a very special thank you to my wife Karin, who has encouraged and stood by me for more than 50 years!” 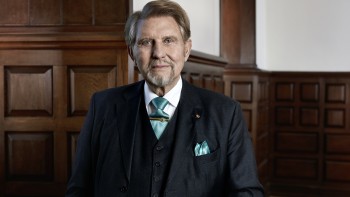 On 26 August Paul Gauselmann, company founder and Chairman of the Management Board of the eastern Westphalian Gauselmann Group, celebrates his 85th birthday.

On 26 August, company founder and Chairman of the Management Board of the eastern Westphalian Gauselmann Group, honorary citizen of the towns of Espelkamp and Lübbecke, bearer of the First Class Cross of Merit of the Federal Republic of Germany – PAUL GAUSELMANN – celebrates his 85th birthday.